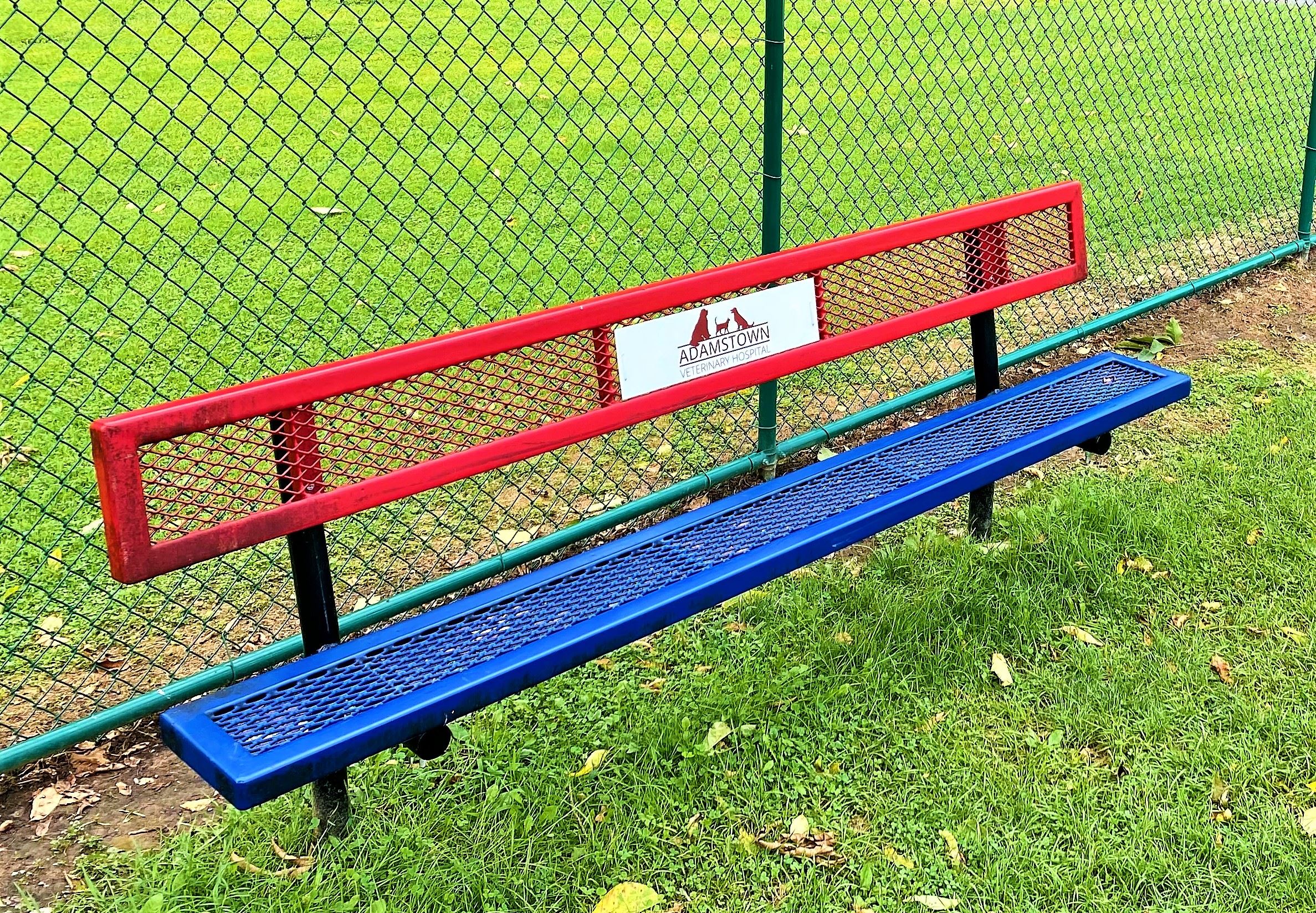 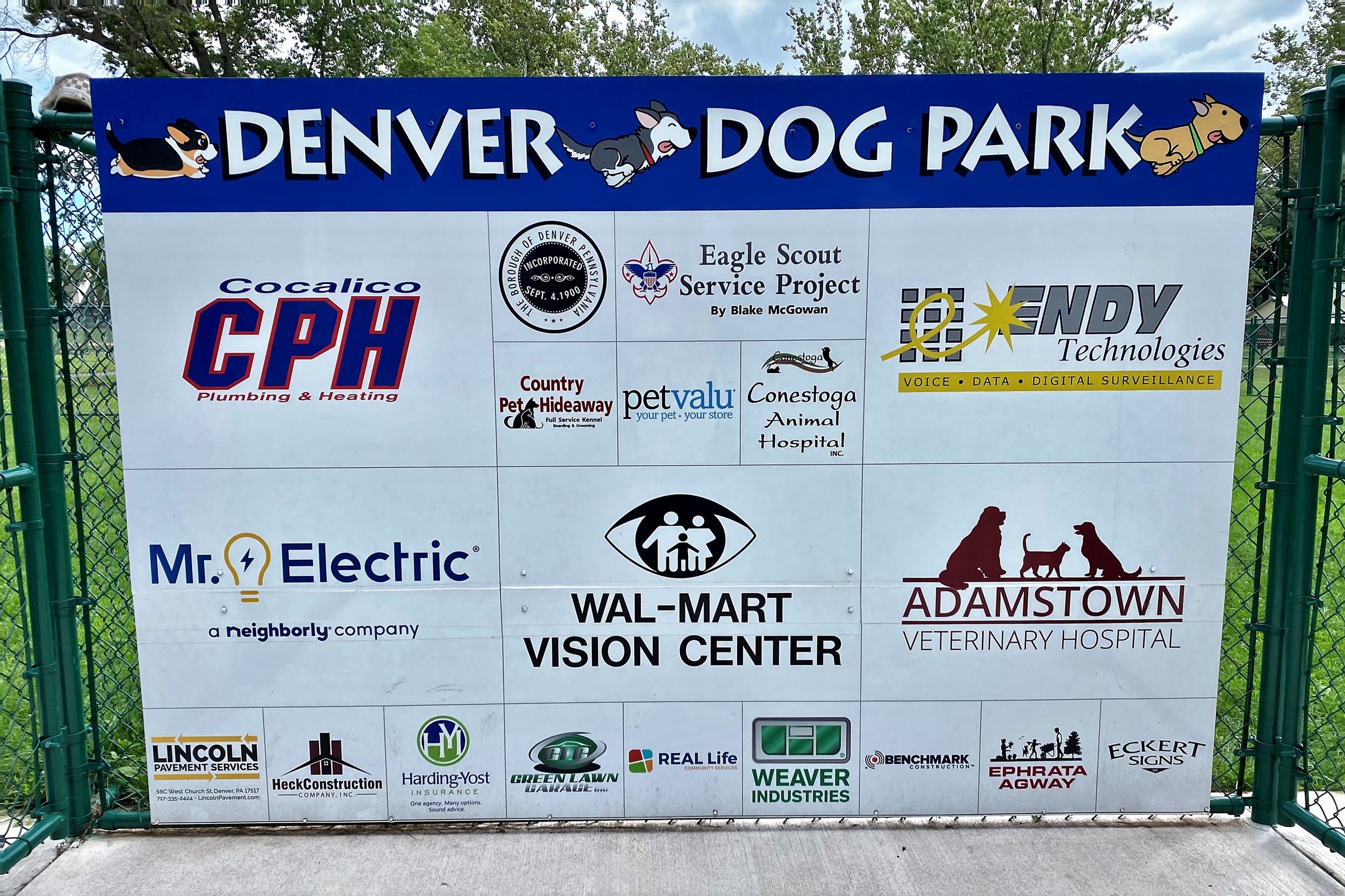 What is a dog park?

A dog park is any fenced-in area where owners may safely allow their dogs to exercise off-leash, play, and socialize with other dogs. Often these areas are managed by the users themselves, and in our case, in conjunction with Denver Borough and the Denver Park Association.

How will the dog park benefit our community?

A dog park provides many benefits:

Why the Denver Memorial Park?

The Denver Memorial Park is a great location, an already established park with pavilions, ball fields, bathrooms, and a concession stand. It is close to large neighborhoods that will benefit from the Denver Dog Park and offers a large variety of recreation, park, and open space facilities, programs, and amenities.

How will the Dog Park be funded?

The Denver Dog Park is being constructed by Blake McGowan, Troop 60, Reamstown, for his Eagle Scout Project.  The Denver Dog Park will include separate areas for small dogs and big dogs and the facility will have an electronic gate which will provide access to dog owners after they purchase an access key fob from the Borough.

The project is being community planned, community funded, and community maintained. In the beginning, corporate sponsorships, donations, and funding by Denver Borough and the Denver Recreation Board will provide the $18,000.00 required to complete the project.  Membership fees will be the primary source of income once the Dog Park opens, though sponsorships and fund raising will continue.

The facility will be enclosed with a six-foot (6’) high chain link fence with three (3) small gates for access.  The main gate will provide access into the facility and two (2) additional gates will provide separate access into the small dog and big dog areas.  The facility also will include two (2) larger gates which will be locked and used by Borough staff for lawn and facility maintenance.  The proposed amenities at the site include waste cans, a dog waste bag station, and benches.   The Borough also will provide a fire hydrant for ambiance.

Are there any fees associated with becoming a member?

Yes, there is an annual fee to join the Denver Dog Park.  That fee is $20.00 for the first dog, and $10.00 for each additional dog up to a total of four (4) dogs.  The fee is collected each year and once paid, the access key fob will be activated for that year.  Renewal fees will be billed in November and due to the Borough of Denver by December 31st for the next year.

How will a dog park affect neighboring property values?

We expect either positive impact, or neutral impact. Typically, according to several articles, property values near dog parks increase, sometimes significantly. Consider this: parks increase the livability of a town and provide for a better sense of community. The more parks a city has, and the more variety of parks a city has, the higher its property values tend to be.

Dog parks have become a sought-after amenity among people relocating to a community, for all the aforementioned reasons. With the number of dogs living in the Denver area, and the family-member status that our dogs enjoy, a dog park has moved from the luxury column, to the necessity column. For many people, their dogs are their children, and they want to live in a community that honors that relationship.

An additional plus for property owners, dog parks purportedly help to reduce crime. Who would commit a crime with dogs and owners watching? In one town, the Deputy Chief of Police stated, “Since the dog park started operations, we have seen a significant drop in calls for suspicious persons or activity occurring near the park.”

Won’t the dog park smell and be unsanitary?

More than 3,000 dog parks exist in the United States today, and the number is growing exponentially every year. Dog owners who use these parks value the opportunity the parks offer and are extremely conscientious about taking care of these parks. Moreover, owners who take the time to use the park care for the well-being of their pets and want the area to be safe, clean, and pleasant. Therefore, dog parks include multiple clean-up stations where owners may access waste-disposal bags and trash cans. In short, dog parks are generally very clean and well cared for by their users, but to add a layer of accountability, volunteers will be coordinated by the committee to ensure proper upkeep of the park.

Will the dog park be noisy?

Studies at other dog parks demonstrate the noise level to be minimal. Observers noted that most often dogs did not bark in the parks, as they are too busy running and playing and sniffing. Dogs that barked did so for short periods of time, sometimes to welcome a new friend when they entered. Interestingly, the studies found the loudest barking was heard from dogs confined in neighboring yards.

Should I be concerned about safety?

Over 50% of dog bites are by dogs in their own yard, protecting their territory. Source: Insurance Information Institute, Dog Bite Liability. Only about 10% of bites are by dogs unknown to the victim. Source: American Veterinary Medical Association.

For membership, proof of dog license, vaccinations and homeowner’s (or renter’s) insurance must be provided and kept on record. Once these documents and the membership fee are received, a key fob is activated and given to the owner to open the electronic gate. At the end of the year if the annual fee is not paid or should there be complaints, the key fob will be electronically deactivated.

We will have an on-line complaint form that is filled out by anyone who has a problem with another dog or its owner. It will be emailed to the committee person in charge of conflict resolution to be handled. If and when a dog demonstrates dominant and/or aggressive behavior, the Borough will address the issue with the owner, and determine whether the pro-rated membership should be returned and membership cancelled, or whether another solution might work.

What sort of rules will there be at the Dog Park?

The American Kennel Club has created a list of suggested rules which the committee will use as a guideline for our park.  See the Denver Dog Park rules here.

How can I help?